Common and costly mistakes beginners make in Evony TKR, from generals to refining stones to gems 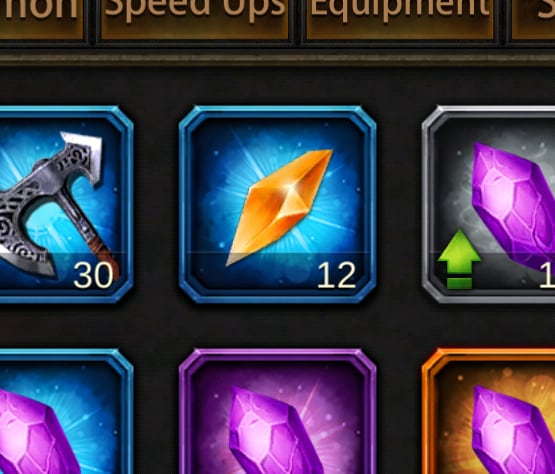 A new player to Evony The Kings Return might feel overwhelmed by the amount of things to do in the game, especially since most activities have little guidance.

Most of the time, activity in the game is rewarded. However, there are a number of things that beginners often get wrong, and some mistakes become difficult to fix later on.

We've compiled a list of the most common mistakes beginners make in Evony TKR:

Spending Gems on the Wrong Things

Evony has a number of "currencies" you can spend, including resources (food, lumber, stone, iron), gold and gems.

The most precious currency is gems and early game activity rewards you with a good amount of gems.

Unless you have a very good reason, you should almost never trade gems for resources or gold. This is particularly true for resources sold in the store, which are extremely overpriced compared to the black market. In addition, there are usually other ways to farm resources or gold for free.

In fact, most of the items in the store are overpriced, and can be found other ways.

Gems should be saved for things that necessarily need them, like refining equipment, refining generals, buying your first dragon (300k gems), and many other activities that absolutely needs gems. 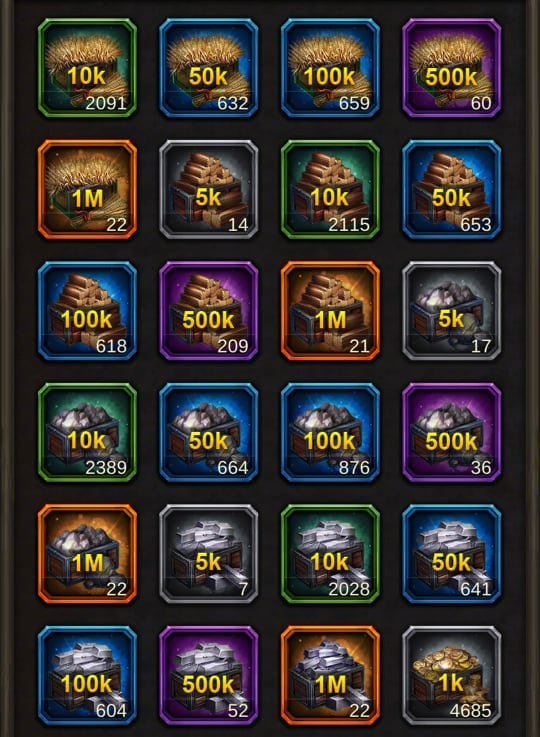 Many beginners will open all of their 50k, 100k, 500k or 1M resources when they get it. This is unwise for a few reasons, especially if they don't understand how troop upkeep works.

Troop upkeep means that food opened will be consumed by troops past a certain limit in the warehouse. But starving troops absolutely has no downside. The best place to keep food is safe in your inventory boxed up. The next best place is to store it in the alliance warehouse.

In addition, often beginners forget to bubble or protect themselves, and the open resources make them a juicy target for bigger players to attack and plunder.

So keep your open resources as low as possible, and plan when you need a building upgrade or troop training, open only as much as you need to complete it. 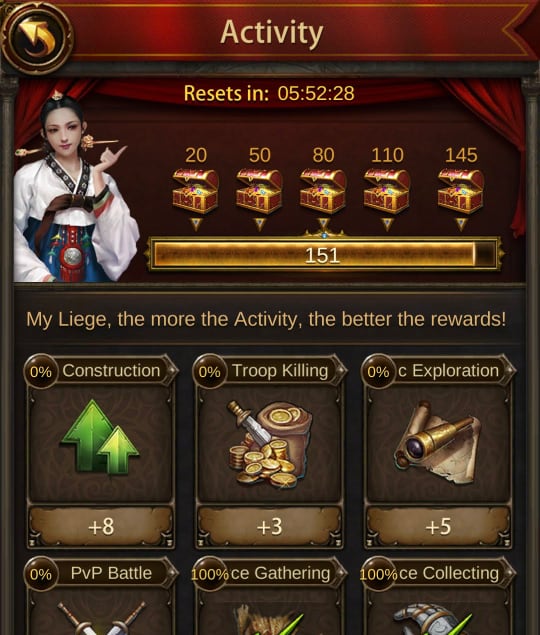 Daily activity, found in the Tavern, provides a series of daily tasks for you to accomplish. Each activity has its own rewards, as well as rewards for getting each of the five stages.

The fifth and final stage, at 145 activity points, has the best rewards. The most notable in this fifth chest is the Key of Conscription, which unlocks the Great General Chest once.

Some of the best generals in the game can be constructed from fragments or come from this chest, so it helps to maximize your chances of getting these generals as early as you can. Get at least 145 activity points everyday.

Not Joining Rallies or Participating in Events

In the beginning, you might think that many of the rewards from boss rallies are not worth the effort or stamina. However, the fact is that everything bosses drop in boss chests or as a reward for killing will be useful now or later in the game.

Join as many rallies as you can, find stamina where you can, or ask your alliance for help if you run out of stamina. Often, bigger players will have extra stacks of stamina lying around. Be nice and offer some resources to trade.

Participating in events also helps you learn and grow. Battlefield is a fanastic place to test your PvP skills at no risk to you, and Undead tests both your defense and gives you great reward for finishing wave 20. All the limited time events, like Dwarves Lucky Apples, Crazy Eggs, etc. all give great rewards, given you participate and are active.

If you are active in rallies and events, it will be much easier in the long run to have the resources to upgrade your buildings, craft gear, level your rank, buy from the alliance shop, etc.

Precious, precious refining stone is arguably the most difficult to attain and most valuable item in the game. It might seem in the beginning you have a lot - thousands, even tens of thousands of refining stones.

But the reality is that once you craft the highest level gear, it might take hundreds of thousands of refining stones to perfectly refine a single piece of Ares or Achaemenidae gear.

Do not use your refine stones to maximize refines for kings or dragon gear. The buffs for dragon gear will carry over to Ares, but the maximum buff increases from 20% to 25%. This means that it's smarter to wait until you have Ares to start fully refining that gear.

Similar to refining stones, runestones are also difficult to obtain, and you need a lot of it to open up the specialties on your best generals.

There are four kinds of runestones, and you will need 12800 of each type to max out a general's specialties. This usually takes players many months to collect, so do not waste your runestones on subpar generals.

Experienced players will often save all of their runestones, gems and lucky stones for a single general for months. They will only focus on that general until all of the specialities are opened and maxed out.

Investing in the Wrong Generals 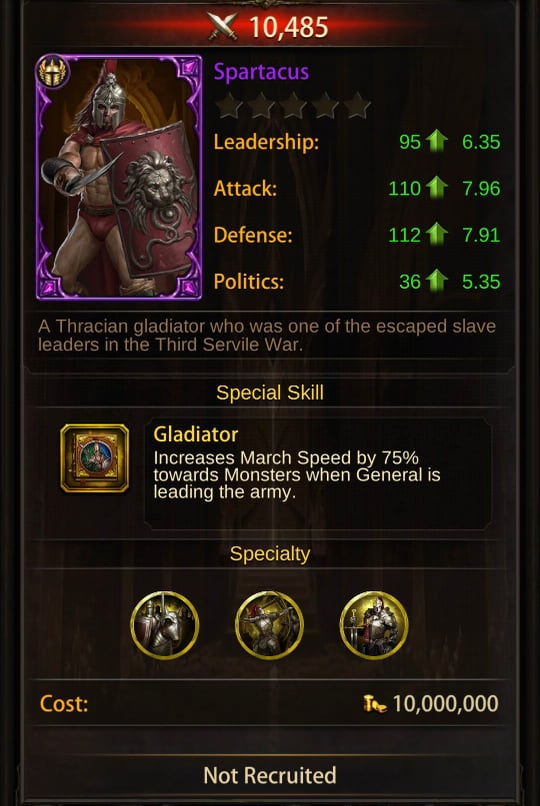 While a purple general might be your first best general, its not worth it to invest much gold, red skill books, any runestones or gems in any purple or blue generals.

You will always find a better gold general in the tavern compared to any purple general you may have. Part of the reason is that gold epic historical generals have a 4th specialty skill and purple generals only have 3. Another part is that the attributes of gold generals go up higher per level up than purple ones.

Duty generals (the generals that give a bonus in a building) are fantastic to have but do not waste your skill books on them.

Always make sure you are investing in one of the best generals in the game before spending gems, refining stones or runestones.

Selling or Underinvesting the Best Generals

When I first got Joseph Johnston, I shared with my alliance, happy for getting such a great defense general.

One person in my alliance asked, "Is he any good? I sold mine."

Don't be that person to accidentally sell a hard-to-acquire, best-in-game general. Always ask your alliance if you are unsure. The gold from selling generals most often isn't worth it.

On a similar note, beginners often ignore Baibars and Queen Jindeok in the tavern. As specialty generals, one helps get you double drops from rallies, and the other helps you gather hundreds of millions of resources.

Keep your good generals and invest in them. For example, fully cultivating Jindeok's politics and leveling her up so she can gather much more quickly. Adding a double drop ring on Baibars and March Speed as a skill helps him get you better rally rewards faster.

Invest in your good generals, they will pay dividends down the line. 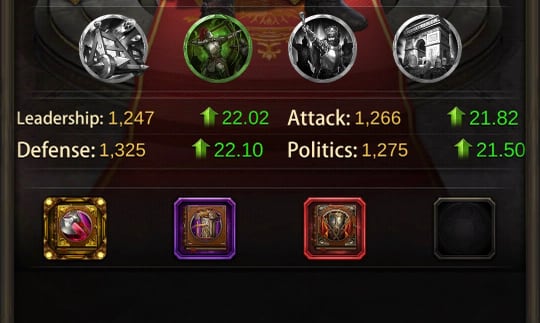 Red or Level 4 general skill books are fairly rare in the early to mid game. You don't want Level 4 skill books to get overwritten by another skillbook, ever.

The way to ensure red skillbooks are never wasted is to use your purple or Level 1 skill books to fill the three skills slots of a general first.

You will want the same skills, just lower level. Evony mechanics will not allow you to stack the same skill on a general, so once you have three purple skills you want, the red ones will only replace the corresponding purple one. This means that each level 4 skill book never goes to waste.

I've seen players who are impatient and use their red skill books first on their new Roland, only to run out of skillbooks because the skills keep getting replaced. This can waste a dozen or more high level general skill books, and you will be at a pinch for more.

Not Offering to the Shrine Daily

Offering can seem like a waste of gems or time in the beginning of the game. However, offering is the fastest way to gain prestige and monarch experience.

Building prestige takes a lot of time, offering at least 3 times, ideally 10-20 times, daily helps keep you in the running for top Rank. Tributes can be bought in the black market, won from wheel of fortune or from the alliance shop. Using gems for the first 3-5 offerings and using tributes after can be a great way to minimize gems spent.

To summarize, these are the top mistakes that beginners in Evony The Kings Return often make:

There are lots of things to do in Evony, and usually not a lot of help from the game itself. However, there are usually a number of knowledgeable players on each server.

Don't make these mistakes that many of us have made at one point or another. If in doubt, ask your alliance for help.