Guide to Evony TKR's new Arctic Barbarian Invasion event, with rules, strategy, and tactics to maximize your points and minimize your wounded 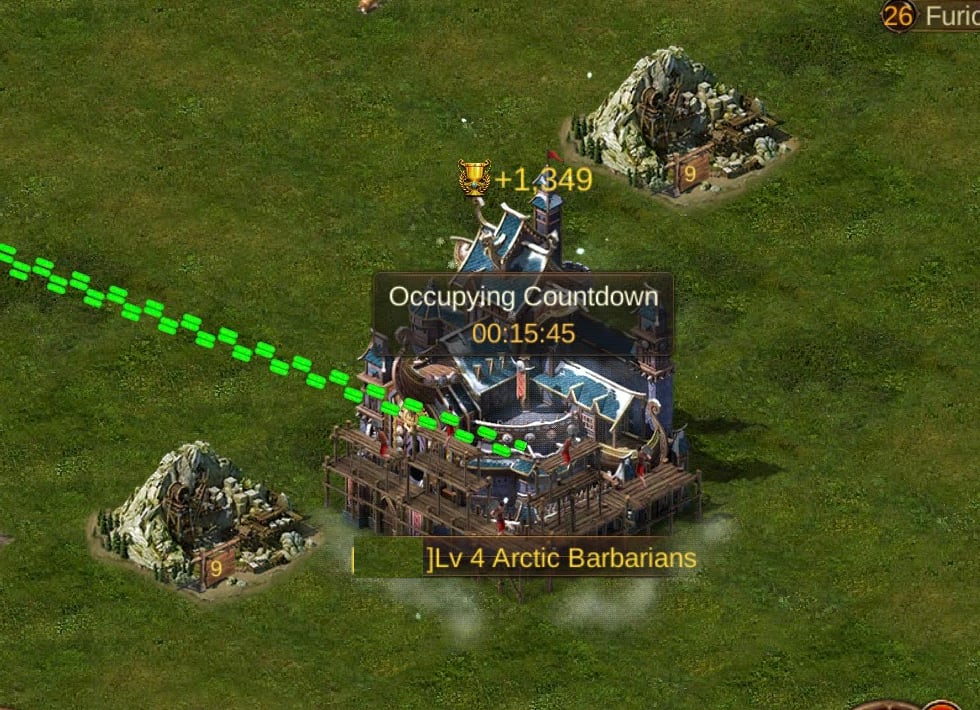 Introduction to the Arctic Barbarians Invasion Event in Evony TKR

The Arctic Barbarians Invasion event is a limited time event in Evony that places NPC barbarian castles on the map for players and alliance to attack. The battle mechanics are similar to PVP, but the barbarians can only defend, will "heal" after an unsuccessful attack and they will disappear after a period of time after defeat.

Participating in the event can award a new castle decoration (Frost Blood), in addition to many other rewards for both the player and the alliance. The quality and amount of rewards is based on the total score the player and their alliance accumulates during the event. 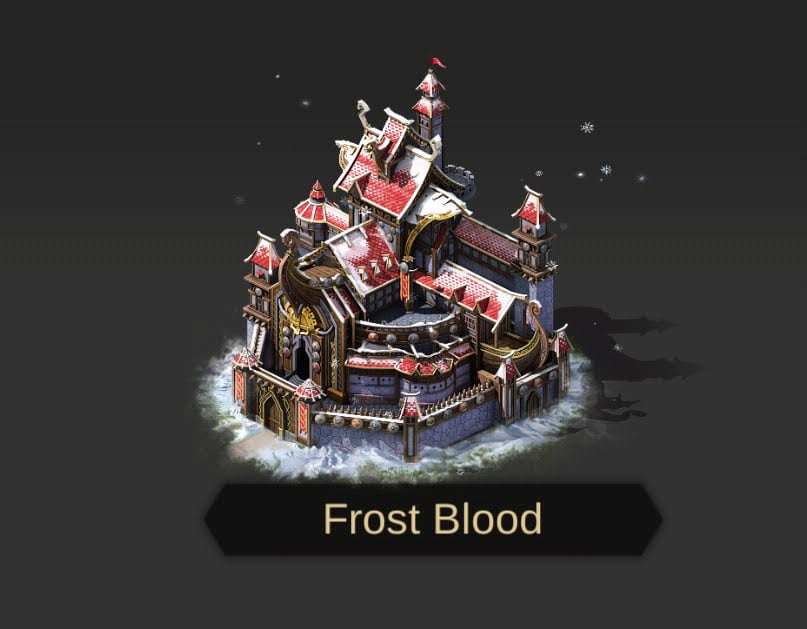 Evony Guide To Arctic Barbarian Invasion Event - Frost Blood Castle Decor
There are quite a few strategies for winning barbarian battles, as well as some tricks for maximizing points for the event. This comprehensive guide to the Arctic Barbarians Invasion Event in Evony TKR is broken up into sections below:

The detailed rules for the Evony Barbarian event are outlined below.

The quick summary is that players can attack Arctic Barbarian castles that spawn on the world map for points. Alliances can also rally towards a win to defeat the NPC castles.

Once a Barbarian castle is defeated, occupying it will earn you points until the castle is burned down (usually 5-30min).

Players can only attack enemy castles 10 times in a given day, with reset at midnight. Players who are scouting, attacking, or occupying cannot bubble during the time, but hospital and trap factory will increase in capacity to help deal with wounded. Unlike battlefield, healing is not free, and will cost you both speed ups and resources.

At the end of the event, total scores per player and alliance are tallied, and rewards are sent out for individual score milestones as well as alliance score milestones. The top ranking players will also receive additional rewards, including the new Frost Blood castle decor.

The tribe from the northern snowfield led by the Barbarian King tried to invade rich Kingdoms when the winter is coming. During the event time, players can defeat the Arctic Barbarians' castle on the world map for awesome rewards. Get ready to fight for the glory of the Kingdom!

The official rules listed for the Arctic Barbarian Event from Evony are below, which gives a good overview of the event:

There are a few things that Evony rules don't tell you as you seek out to defeat barbarian castles. One example is that barbarian cities, even the same level, are worth vastly different points. Some barbarian cities have type weaknesses and sub city debuffs don't count. Here are some helpful but lesser known bits we summarized for Evony's Barbarian Event:

There are 6 levels of barbarian cities

The easiest castle to defeat is level 1, and the most difficult is level 5. Level 6 is a special barbarian city that is unlocked when a player uses the Barbarian Arrest Warrant (also known as the Barbarian King Token). The level 6 palace is actually less difficult than level 5.

The same level barbarian city can have very different troop compositions and be worth different amounts of points to defeat and occupy. The "total power" is an indicator, as well as the "highest power required for occupying". 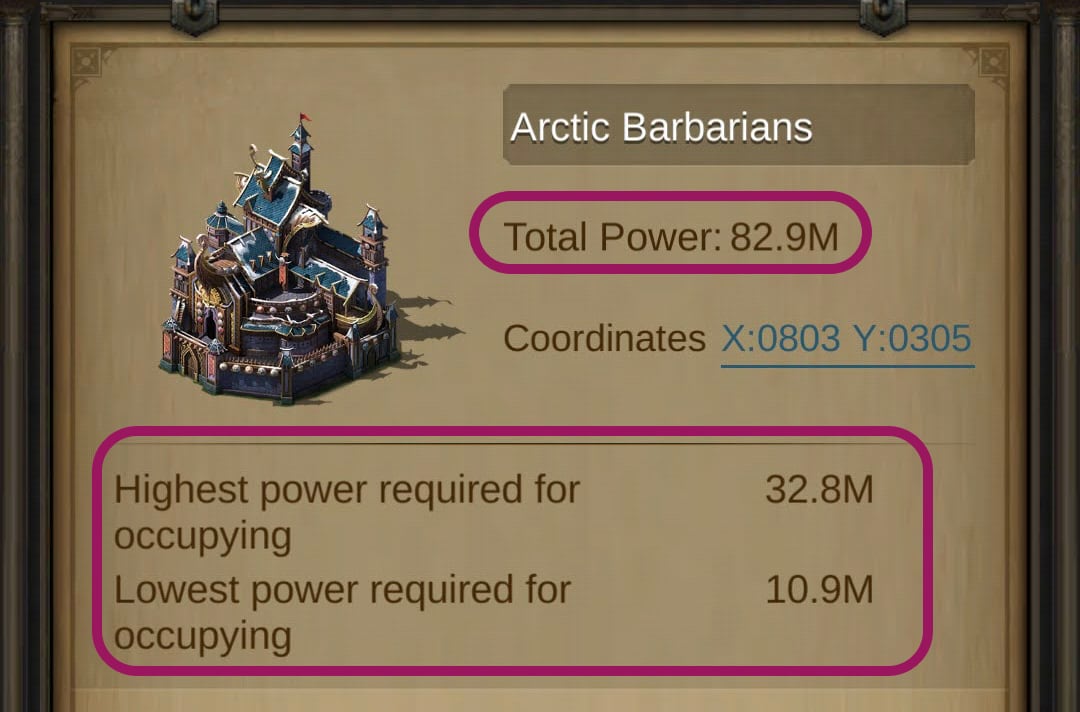 Even if two barbarian cities are similar in power, they can still have very different difficulties. Specifically, some barbarian cities have an even distribution of archers, ground and mounted troops. Others have a weakness in a specific troop type. To minimize wounded, you will want to hit the cities which have a troop weakness. 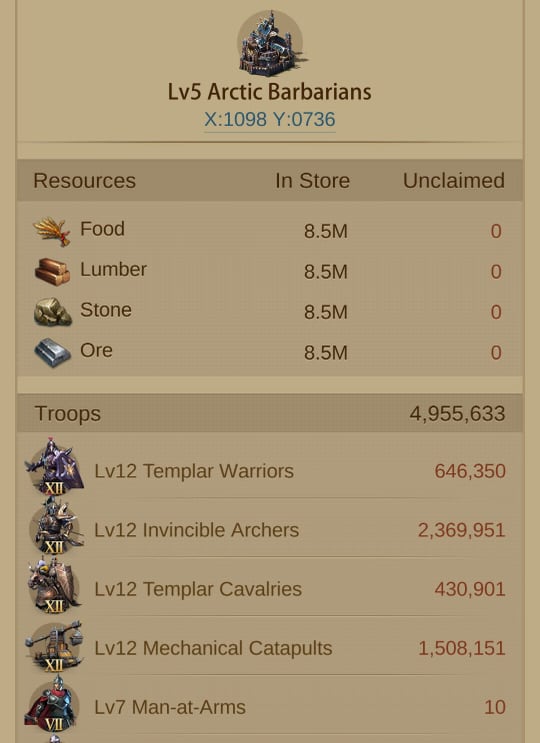 Evony Guide To Arctic Barbarian Invasion Event - Level 5 Arctic Barbarian Scout Report
In the sample scout report above, this level 5 barbarian city has a cavalry weakness and an excess of archers. This city is ripe for a ground centric PVP march.

Usually when you attack another player, your sub cities join in to help. However, in this event, your subordinate cities can not help debuff the barbarian NPC. This means the barbarian attack buffs are going to stay relatively high. Your research (de)buffs will help, on the other hand.

You can solo attack a barbarian city, or you can rally one as an alliance. Alliance rallies on level 5 cities will drastically increase your chances to defeat it, as well as offer more points per second for occupation. 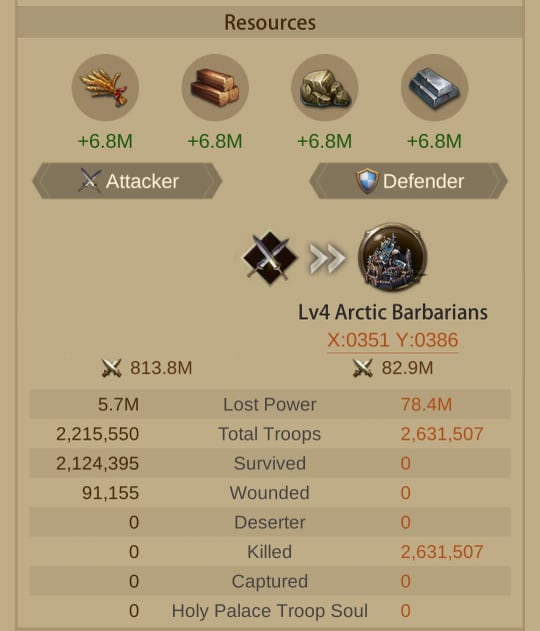 There is definitely some prep work to do for smoothly defeating Arctic Barbarian Castles in Evony. Here's a checklist:

Steps to Defeat a Barbarian Castle

Taking the time to decide which PVP attacking march to use, and which barbarian city to attack will greatly increase your chances of winning, minimizing wounded and maximizing points.

A general rule of thumb for attacking cities (PVP):

There are a number of factors that influence how many total points you and your alliance score in the event. Here are some helpful tips for maximizing points in the Arctic Barbarians event: 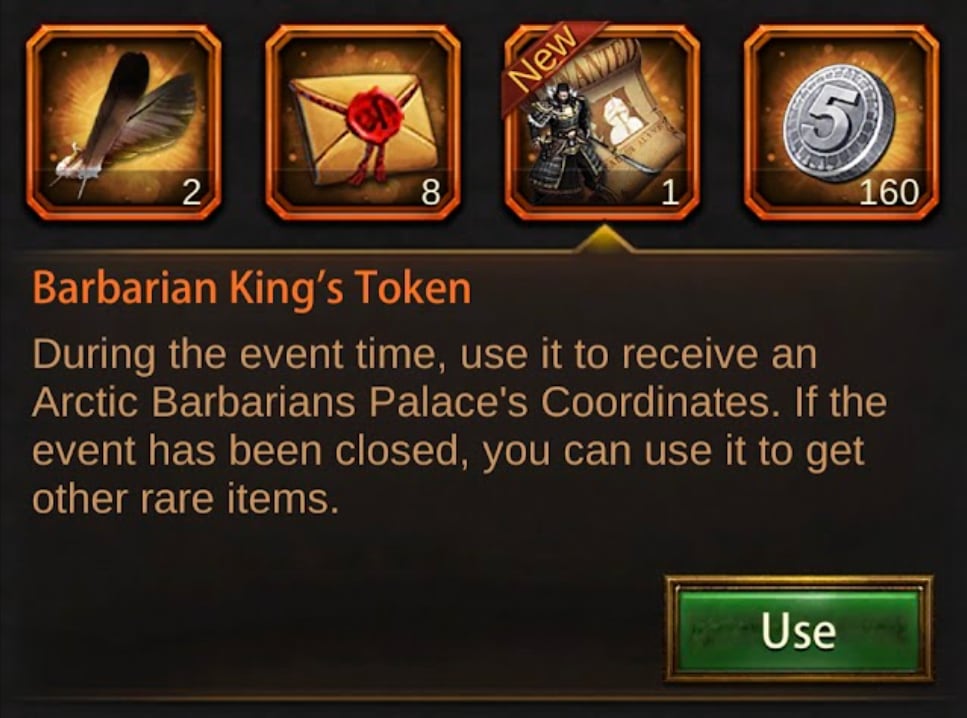 Disclaimer: If you have lots of big spenders on your server, and players are opening Barbarian Tokens or Arrest Warrants left and right, it's going to be very difficult to rank high in your server.

For example, a high level player (33-35) who doesn't have any tokens can expect around 30-50 million points per day for attacking and rallying, and then occupying 10 level 4 or level 5 barbarian cities. This is about the same as a single Barbarian King Token.

Given this, it's still worth it to participate in the Arctic Barbarian Event for individual score rewards. For example, the first milestone reward for achieving 5 million points rewards 4000 gems, resources, treasure boxes and refining stones. 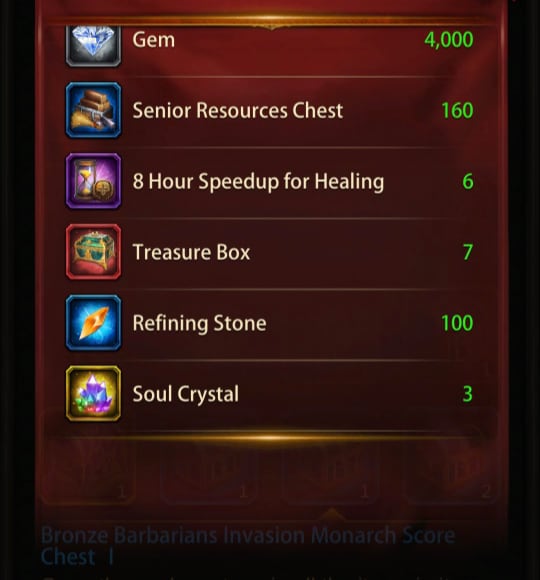 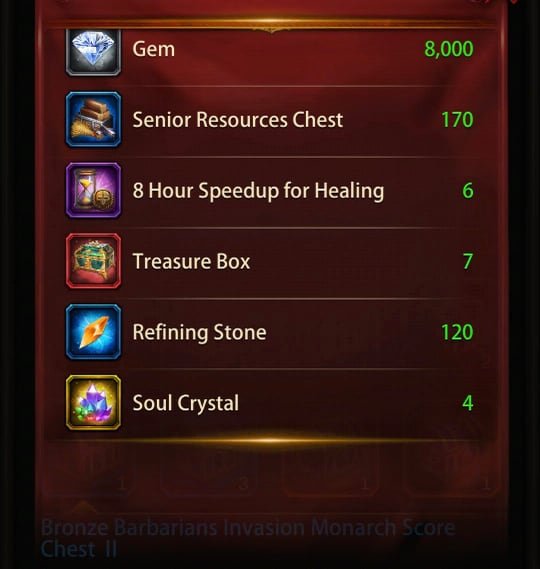 Outside of individual score milestones, ranking in the top 5 for the Arctic Barbarian Invasion event in Evony has the best rewards, hands down.

You get the Frost blood castle decor, 300,000 gems, and generous amounts of dragon source fragments, treasure boxes and tactic scrolls. 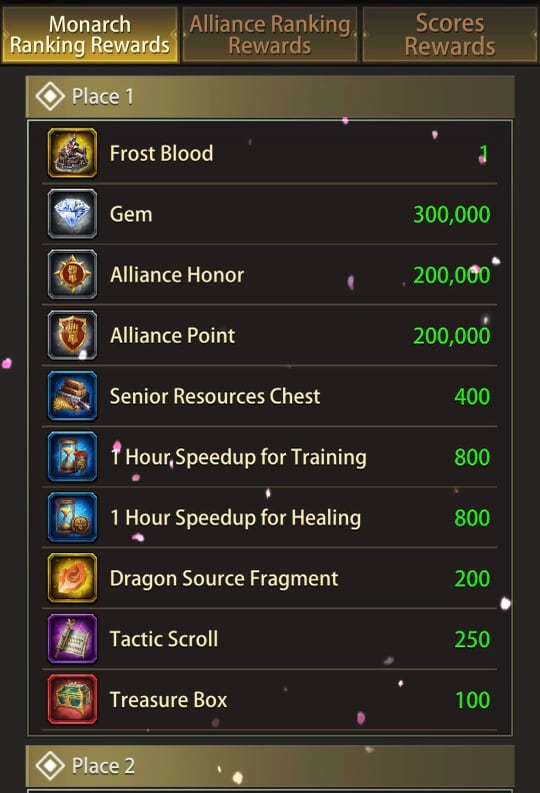 Evony Guide To Arctic Barbarian Invasion Event - Rank 1 Individual Rewards
However, given the amount of players who used and who could have used Barbarian King Token or Arrest Warrants, ranking in the top 5 may or may not be achievable.

One strategy for spenders would be to save their tokens towards the end of the event, if they are close to the top 5 to secure a win.