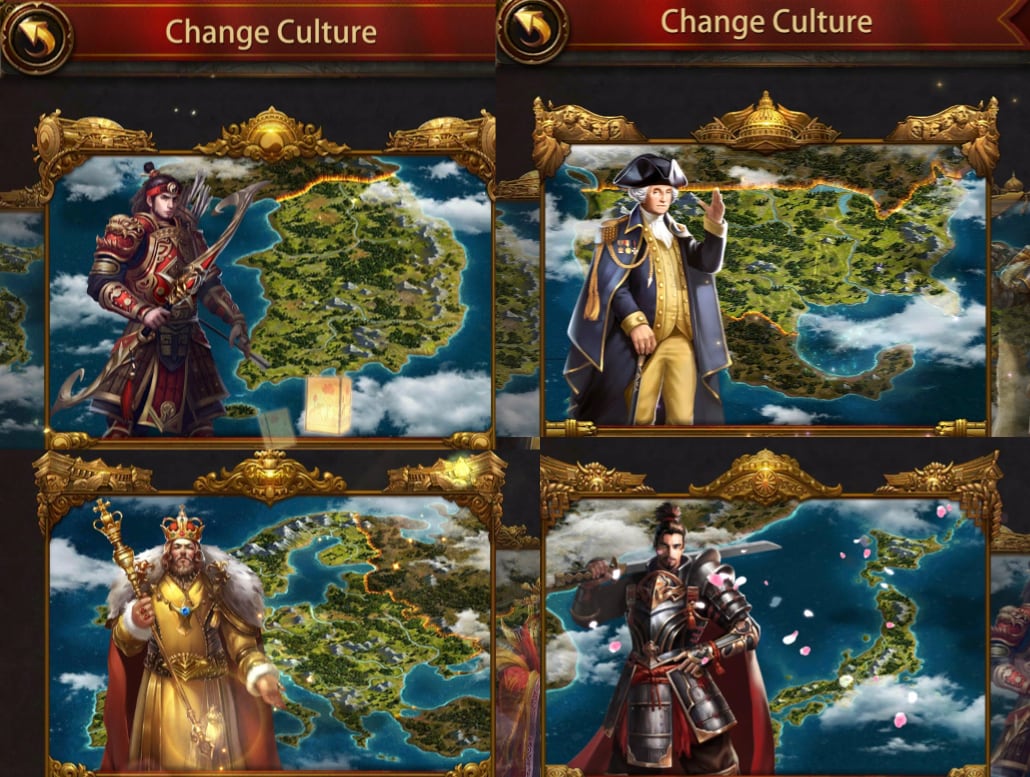 There are seven cultures in Evony TKR, each with their own cultural bonuses, such as boosting research speed or increasing mounted attack. Additional different bonsues come from your in-city subordinate city, which follows the culture of your keep.

Players often wonder which set of benefits are right for them. Although some cultures have definitively better perks than over others during long term, the best culture for any player depends on where they are in the game and what they need to accomplish.

This guide will analyze in detail the perks of each culture, give guidance on how to maximize your benefits by changing cultures and upgrading your attached subordinate city.

The seven cultures in Evony The King's Return are summarized here. Detailed analysis for each culture is linked below.

Evony gives one free culture change at the start of the game, and additional culture changes cost 2000 gems. This makes it reasonable to occasionally change your culture.

One example of a semi-permanent change in culture is switching Europe to Korea in mid to late game. After an alliance or a player establishes their fast and powerful boss rally marches, the cultural bonuses from Europe become less useful. Instead, the player may chose to focus on their ranged PvP march, for which lumber production, ranged attack and gathering bonus make a nice trio.

An example of a temporary culture change is switching to Arabia to speed up healing troops in a full hospital, or to get bonus experience and prestige from bulk offering a large stack of tributes.

Another example of a temporary culture change can be switching back to Europe from Japan to speed up construction of an expensive building, such as a late game keep upgrade.

The important lesson is that cultures are fluid in Evony, and switching to maximize the goals you are trying to accomplish often will save you much more resources, speeds or even gems compared to the switching cost.

All experienced players upgrade the rarity of their in-city subordinate city, although upgrading costs quite a few gems. For example, the upgrade from green (uncommon) to blue (excellent) costs 50,000 gems. But the upgrade from a blue to legendary (purple) costs 500,000 gems.

Most players will have at least a green in-city subordinate city; many players have a blue or purple in late game. 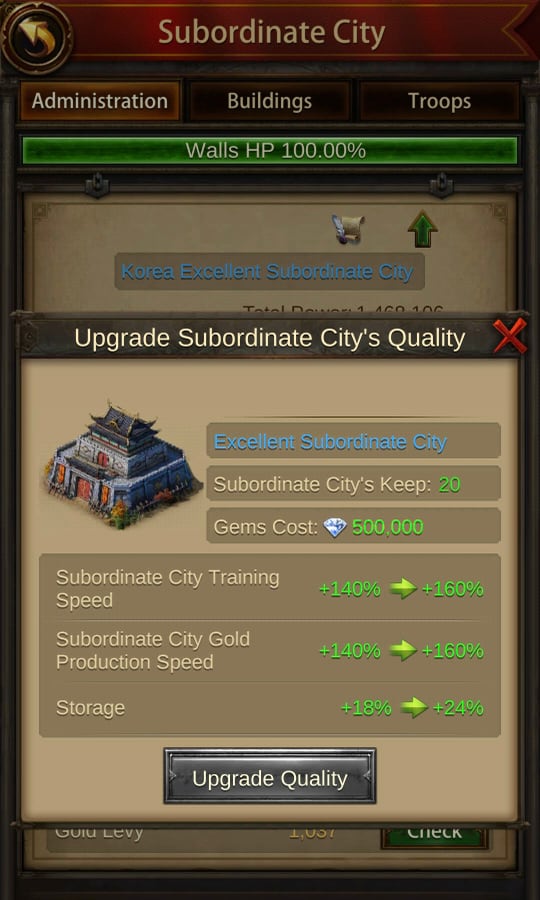 "When the darkness of barbarism comes, the chivalry rises from the chaos. Warriors of Europe, raise your sword and revive heroes' glory again."

Europe has the following culture and subordinate city perks or features:

Europe is a very popular culture to use in early to mid game. The boosts for mounted attack and march speed to monsters benefit rally starters, and the in-keep subordinate city boosts construction speed and growth of your generals through bosses or monsters.

If your alliance is starting out and you can use that extra help running boss rallies with cavalry, Europe is the culture for you.

However, very few players use Europe in late game Evony, other than to switch to Europe when there is an expensive building to upgrade. 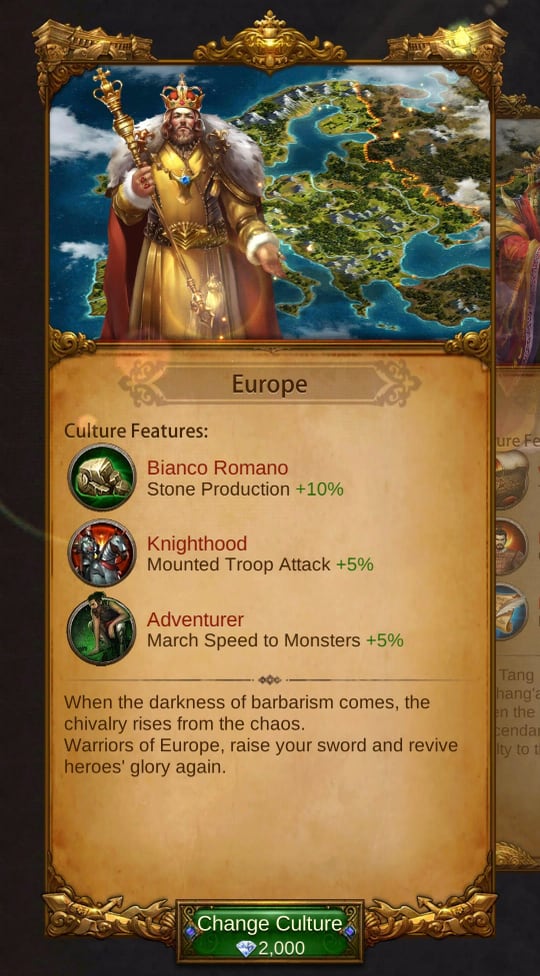 "The Tang Dynasty wakes up in the morning bell of Chang'an. When the flames of war rise, the Chinese descendants are ready to offer their blood and loyalty to the earth."

China has the following culture and subordinate city perks or features:

Some very experienced players choose China in the early to mid game. This is often a specific situation - when they are part of an active large alliance who have other rally starters, and they do not want to train many troops for a while.

Another situation where China could be helpful is when you have a ton of troops you want to train. The in-city subordinate city offers up to 10% training speed bonus, larger than 3% culture bonus from America. If you are short on training speeds, but have a ton of resources, switching to China temporarily to train many troops is worth it. 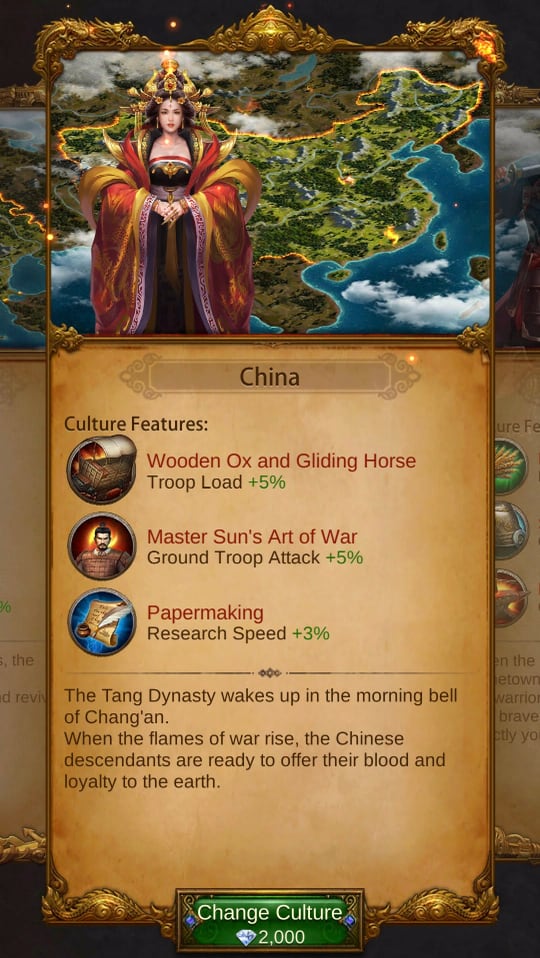 "When the spring breeze blows over the fields of hometown, every grass is watered by the blood of the warriors. The brave who view life as morning dew, here is exactly your splendid world."

Japan has the following culture and subordinate city perks or features:

Japan is a popular culture to use in late game Evony for PvP, usually after keep 33. This is because players tend to focus on battlefield and server war and the additional attack bonus from main city is a great fit.

In addition, another good time to switch to Japan is when you have a few pieces of expensive gear to craft. Japan is the only culture that offers a crafting speed bonus and the 8% speed boost for crafting is relatively high.

"Take the mountains as the barrier and rivers as the border. Korea warriors are born to fight, if one of them keeps the road, he will frighten a thousand people."

Korea has the following culture and subordinate city perks or features:

Because ranged or archers is the main PvP attacking march for many players, the additional ranged troop attack and increased lumber production both help in creating a strong ranged march. The subordinate city bonus of gathering extra resources also helps with accumulating resources faster to train armies or construct buildings.

Arabia has a subordinate city bonus for healing speed that's slightly better than Korea. If you are in a situation where you need to heal alot of troops fast, Arabia is a better choice.

Many players will keep Korea as their semi-permanent culture in mid to late game, for the city growth bonuses. 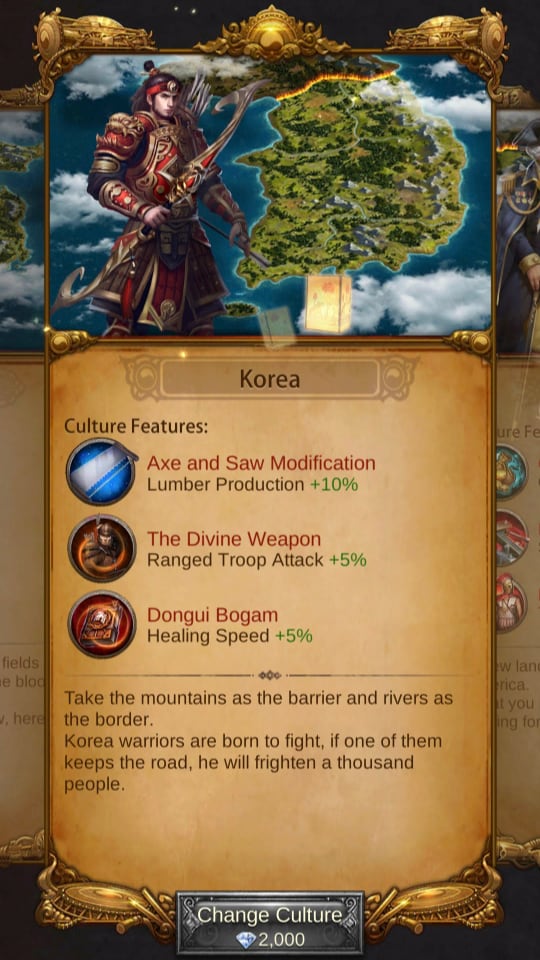 "A new land of hope, a free United States of America. What you have to do is to be like a real hero, fighting for the devotion in your heart!"

America has the following culture and subordinate city perks or features:

America is often used by players who want to focus on gold production and research or tech.

America isn't as good as China for faster troop training, since China's subordinate city bonus provides up to 10% depending on the rarity of the in-city subordinate city.

The seige machine attack bonus is not that great, even for players focused heavily on seige. This is because both Japan and Russia have subordinate city bonuses which are slightly higher attack or defense for all troop types.

"The cold of the Northern tempered the will of the soldiers, and the strong enemy kept them on guard at all times. Russian warriors, you will overcome all difficulties and conquer to the end of the continent!"

Russia has the following culture and subordinate city perks or features:

Russia is a popular cultural pick for a late game player heavily focused on defense. The in city troop attack is a fantastic defensive bonus, and the increased trap attack also helps defensively.

The cultural bonuses of Russia are not as consistently useful compared to other cultures for growth. The mounted bonus boosts defense is a little less useful than Europe's mounted attack boost.

The Russian trap building speed is a unique perk for building lots of traps at once, but very few players build a ton of traps every day. 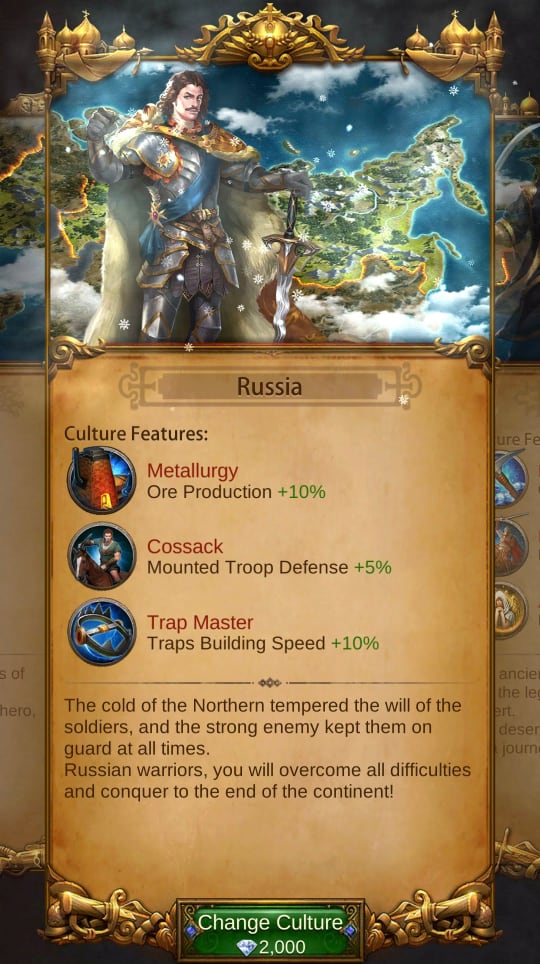 "The ancient land kept the heritage of wisdom, and the legendary wealth hid in the depth of the desert. The desert heroes have awakened, and they are on a journey to build an eternal glory."

Arabia has the following culture and subordinate city perks or features:

Arabia has a few unique perks in its cultural and subordinate city bonuses.

The most notable Arabian perk is the bonus from offering, which can greatly help a player who has a lot of tributes stored up. Offering consistently not only ensures monarch level growth, but also keeps your prestige (and rank) high.

For a player trying to reach the next monarch level, or climbing the prestige ladder, Arabia is the best choice when using bulk tributes or even offering with gems.

Another unique perk for the Arabia culture is the gems gathering speed. Not a lot of players depend on gem gathering for gems due to how slow it is, but it is one of the more consistent ways to get gems in the game.

Finally, if you have lots of troops to heal (after a few battles in Server War or PvP), switching to Arabia before healing troops can decrease the time it takes to heal your troops. 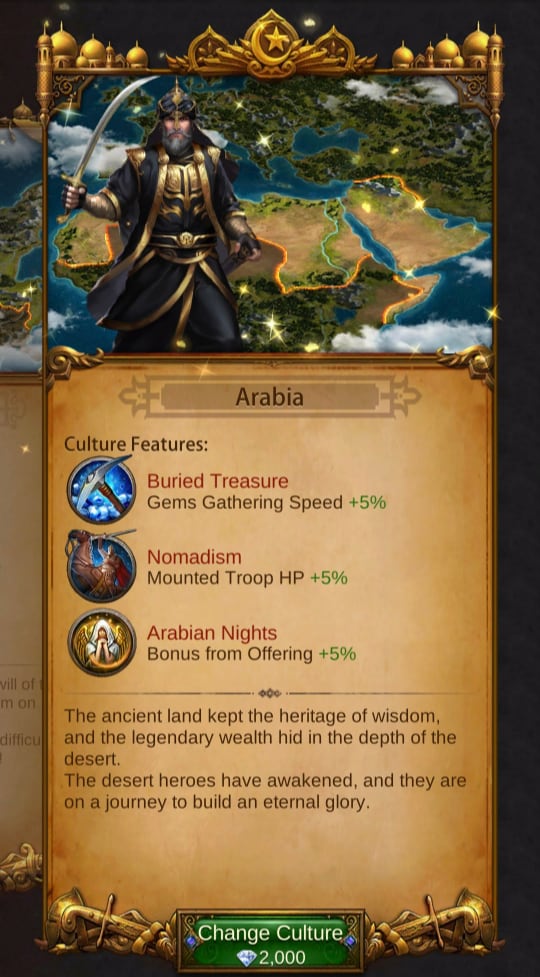 The seven cultures in Evony The King's Return each offer 3 cultural bonuses, in addition to 2 subordinate city perks for a total of 5 bonuses when you switch cultures.

Culture switches do cost gems, but queueing up a large batch of traps to train, troops to heal, tributes to offer or tech to research can efficiently take advantage of each culture's bonuses.

Evaluate which Evony culture gives you the best set of perks for your current situation and also plan to use different cultures to their advantage in the longer term.